back to top
You are here: Home / Places to See / Mazmullar 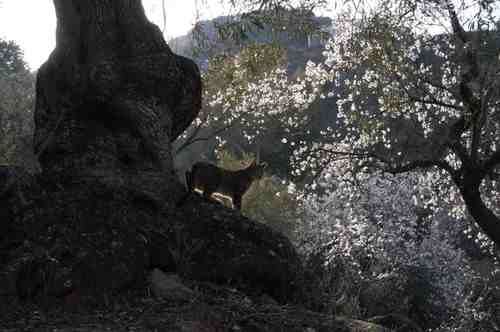 Rising above the Solano valley and overlooking the villages of Comares and Los Ventorros is the historical site of Mazmullar. Little has been known about the past of this place until an uprooted tree revealed several Arab artifacts in 1907. Since then, further archaeological excavations revealed a well preserved Moorish and Roman civilization.

In Mazmullar, an imposing underground aljibe with an Arabic inscription on one of its arches was also discovered. This area was later declared a site of national historic interest in 1937.

The origin of Mazmullar was thought to date back to the 9th century. It was part of the Moorish kingdom of Omar Ibn Hafsun, who was a rebel leader opposed to the Capifs of Cordoba. Ash and charred artifacts were later exposed suggesting that this place may have been burned by the opposing forces.

Mazmullar was later reoccupied in the 12th century but little is known on why the village was eventually abandoned.

Today, the local people use a part of the village to grow olive and almond trees while a large part of it has been left out to preserve its history.

A great way to explore Mazmullar is through scenic walks or even long treks. You may start from Comares or the much nearer village of Los Ventorros.

There are a lot of trails that you can follow that will lead right through this stunning place of much historical importance but one route to fully explore it is the purple route or rightly named La Mesa de Mazmullar.

This walk spans about 35 kilometers with an estimated time of about 5 ½ hours in total. If you are up for it, the purple route starts at Comares then to the village of Mazmullar and ends back in Comares. Along the way, not only do you get to appreciate the historical importance of Mazmullar, you also get to see nature at its best.

A great way to get to know a village is to know its history.

You may read on any place’s history in books but rarely can you see it preserved in front of your eyes.

In Mazmullar, get to observe tomb stones, water pots and oil lamps as well as Arabic scriptures that date back to the 9th century.

Know what it felt like to live in a Moorish settlement which was untouched by any form of modernization and where villages relied on the gifts of nature for survival and as a source of living.

Mazmullar has so much more to offer than just history.

In this village, you also get to glimpse flora and fauna that are rarely seen in other regions of Spain.

Enjoy seeing carob trees, dog rose, buckthorn and Spanish brooms along the way. If you are lucky, you might even run into foxes, weasels and wild boars.