back to top
You are here: Home / Places to See / Ronda 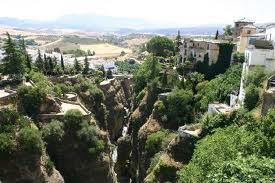 The old town of Ronda has retained much of its historic charm despite it being the fastest growing town of Andalucia. It is considered to be one of the largest hill towns in Andalucia.

It is situated in a very mountainous area about 750 meters above sea level. Even with its terrain, Ronda is very easy to visit because it is one of the few hill towns with a train station.

The Guadalevin River runs through the city dividing it into two and carving the steep canyon called, El Tajo where the city now perches. One part is the city’s newer and sprawling Mercadillo quarter while the other is the Moorish quarter. A massive bridge has spanned the two quarters since the 18th century.

Ronda is considered the birthplace of modern bullfighting. This spectacular event is now held yearly at the beginning of September.

Its bullring – the Plaza de torros de Ronda – is superior to that of Seville and even considered to be Spain’s best and oldest. This 2-tiered arena was built in 1785 ad is surrounded by 136 Tuscan columns that create an 18th century Italian theatre atmosphere. It can also house 5,000 seats.

In Ronda, bullfighting is very much considered an art rather than a sport. Newspaper coverage of the fights are not written in the sport section but rather in the culture section. Locals and lovers of the art explain that it is more about celebrating the noble Andalucian culture rather than the actual killing of the bull.

Three bridges that span the canyon is a spectacular scenery and architectural marvel for any visitor. The Puente Romano, Puente Viejo and Puente Nuevo are some of the city’s most impressive features.

Arab baths called Banos arabes can be found below the city. These structures although partially intact dates back to the 13th and 14thcentury and are also worth a visit.

The city of Ronda holds a yearly pilgrimage called “romeria”. This is organized by the local Catholic brotherhood and is in honor of the Virgen dele Cabeza.

This pilgrimage is a great way to participate in a local tradition that dates back to the 20th century and also a wonderful way to see the lighter side of Ronda.