back to top
You are here: Home / Places to See / Seville 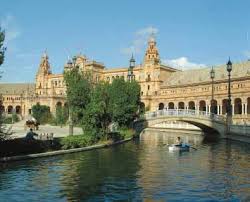 Seville is considered to be the capital of Andalucia, Spain. It is also the historic, artistic, cultural and financial capital of Southern Spain.

Seville is about 2,000 years old and its history gives it a distinct personality. Various civilizations have been very vital in its growth and it has left Seville with a large and well preserved historical centre.

The city has heavy influences of the Arabic culture as well as strong medieval, Renaissance and baroque influence.

Aside from its history, Seville is also very rich in culture and art. The famous sculptor Martinez Montanes and well known painters Velazquez, Murillo and Valdes Leal were born in Seville and left behind very important works of art.

The city has also assumed a vital role in world literature as it is the birthplace of the legendary Don Juan, who conquered the hearts of woman all across Europe.

It also played an important role in the discovery and conquest of America as Columbus started from a port near Seville to discover the new world.

This bustling city is one of the most beloved places by those who visit Spain. Aside from its rich culture, it also enjoys a great hot-summer Mediterranean weather climate averaging about 3,000 hours of sun per year.

Seville is a gastronomic centre. If you are visiting the city, never miss out on the tapas, the typical small Spanish dishes. It is credited with the invention of tapa and numerous tapa bars can be found all over the city where the choice of food is virtually limitless.

The Seville Fair, also known as the April Fair and the Holy Week are the two most well known festivals in Seville. Catering your visit in time for these feasts will be a decision you won’t ever regret.

During the April fair, families, businesses and organizations set up marquees in which they spend the entire week drinking, dancing and socializing.
Seville is also internationally renowned for its celebration of the Holy Week. There is a beautiful but solemn procession and then a lively fair held two weeks later.

Seville offers great entertainment from the late evening to early hours of the morning. Disco-pubs and nightclubs are abundant and usually almost always full of locals and tourists. Most of these night-life centres are found within and around the city centre.